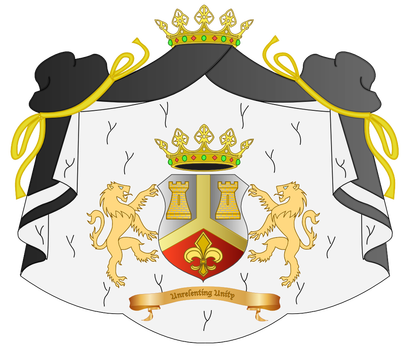 The House's coat of arms
Not long after Thadok became a very wealthy man, with one of the greatest fortunes of the Far Ground -and not to mention of Yliakum-, the troubles started. Not for Thadok, but for the Octarchy: a shortage of grain and other food, as well as a lack of wood for fireplaces and construction, struck the Third Level. People were unhappy with what they thought was a bad administration. The Octarch in charge at the moment sent couriers to Thadok, and he soon started pumping tria to the workers in the Winch in the Barn, or the Second Level. He put his lumberjacks and farmers to harvest and grow as many trees and plants as they could to provide the needy with them, and sent merchants to the lowest levels to buy seaweed in case the firewood wasn't enough.
_
And then, thanks to the efforts of Thadok Defay, the situation in the Far Ground returned to its normal state. The Octarch, pleased with Thadok's actions, bestowed upon him the title of Lord of the gentry. The Enkidukai soon changed his second name, becoming Lord Thadok DeFaye. But by the time he took on the lordship, he was too advanced in age to enjoy it, so he retired in favor of his son, Segos DeFaye, and presented him with the sabre he himself comissioned to represent the title of Lord DeFaye.
Next Page
Powered by